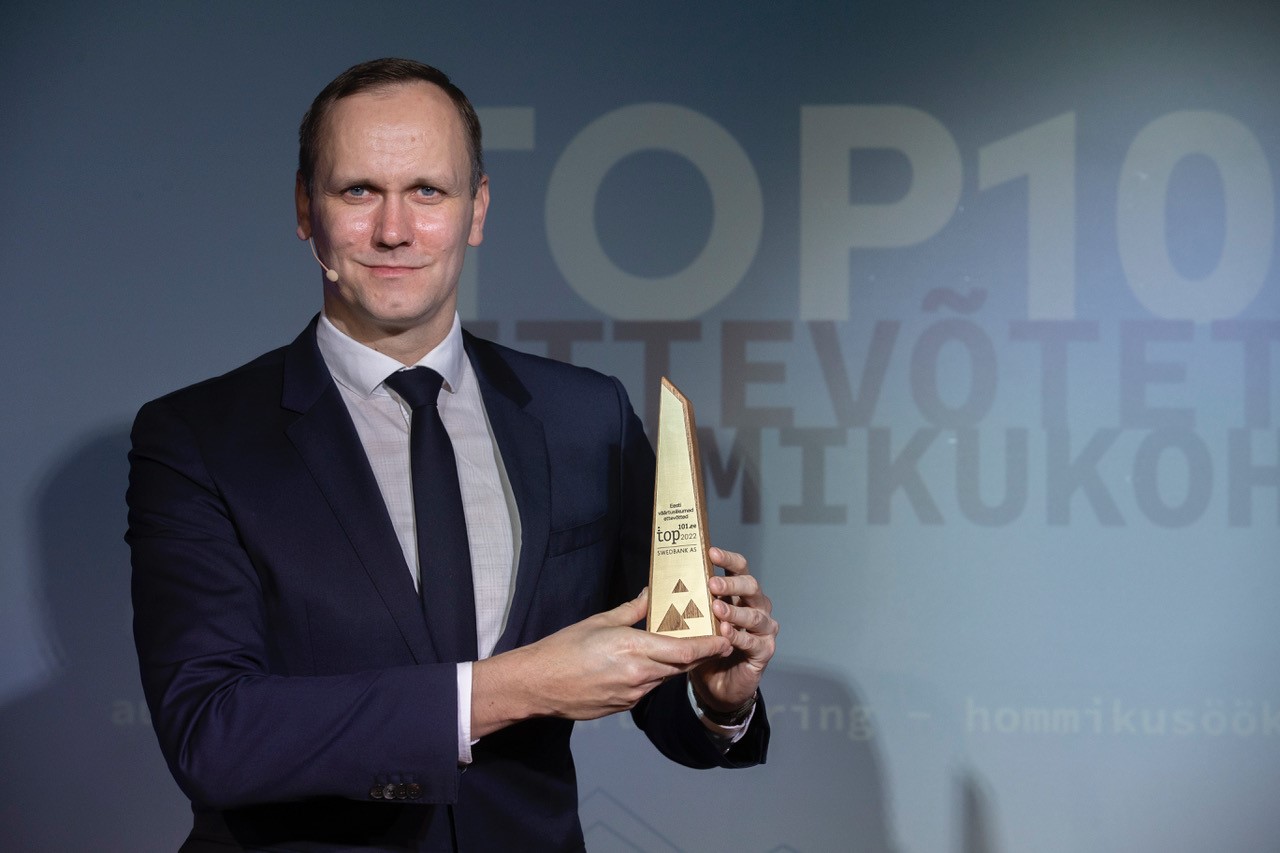 TOP101: Estonia's most valuable company is Swedbank Estonia with a value of 1.5 billion euros

According to Olavi Lepp, board chairman of Swedbank that won TOP101 this year and last year was second, the award for the Estonia’s most valuable company is a great recognition for Swedbank's customers, employees and cooperation partners. “Swedbank has the largest market share among banks in Estonia and is one of the engines that keeps the Estonian economy running. A lot of effort goes into this every day that could not be done without a dedicated team and bold ideas.”

Prudentia's managing partner Illar Kaasik on whose initiative TOP101 is prepared, said that this year's winner Swedbank has been ranked among the top three in all TOP101 that have been prepared so far, and is a stable and strong company that creates added value for owners and the society. Kaasik added, however, that this year’s TOP101 should be analysed also under a different angle. “As the TOP101 backbone data is effective as of 31 December 2021, this year’s ranking does not fully take into account the huge impact of the war in Ukraine, rapid growth in energy prices and inflation that has already affected many companies in Estonia,” he noted.

Of the top four most valuable companies in this year’s TOP101, three are financial institutions and fifth is last year's winner Eesti Energia. “As for Eesti Energia that won last year’s TOP101, its position was influenced by the fact that its subsidiary Enefit Green was successfully listed on the stock exchange, and it is our principle that companies that make an IPO are ranked as separate entities in TOP101,” Kaasik explained. “Considering major development plans of Eesti Energia and Enefit Green, one can say that both have what it takes to win TOP101 one day.”

Kaarel Ots, CEO of Nasdaq Tallinn Stock Exchange, said that the TOP101 ranking helps to highlight the engines of the Estonian economy, as well draws public focus on the factors in our society and economic life that have the greatest impact on the value of companies. While the most immediate feedback mechanism for assessing the value of a company is the listing of a company on a stock exchange, the dataset similar to TOP101 highlights is the first and necessary step in analysing and understanding the value.

According to Kaarel Ots, the TOP101 ranking of Estonia’s most valuable companies distinguishes from several company rankings compiled in Estonia by the fact that TOP101 ranks companies by more than only their turnover, profit and growth numbers: “The TOP101 ranking gives companies clear feedback on how they are viewed and seen by the society, the environment and financiers. When the ranking is compiled, Nasdaq Tallinn gives an assessment of the company's transparency through the corporate governance score, which affects the final value of the company by up to 20%,” he noted.

In this year’s TOP101, the most successful sectors in terms of value are the wood sector, energy sector and medical sector, with strong improvements in the companies' financial results and value. Companies operating in the energy sector benefited from almost a 55% growth in EBITDA multiples.

The total value of the TOP101 companies in 2022 increased to 29.6 billion euros compared to 28.9 billion euros a year ago. The increase in value would have been even larger without considering Enefit Green separately from Eesti Energia.

Prudentia Tallinn in cooperation with Nasdaq Tallinn, started to prepare the TOP101 ranking of Estonia's most valuable companies four years ago. The aim of the TOP101 ranking is to promote the Estonian capital market and highlight the contribution of Estonian entrepreneurs to the sustainability of the economy. Estonian entrepreneurs are creating new jobs and are generating the tax revenue, keeping the country running. The total value of the 101 most valuable companies and its change is showing how the country's economy is doing and what may lie ahead for us.

The full list of TOP101 Estonia’s most valuable companies in 2022 is available at www.top101.ee. Detailed presentation of TOP101 including additional materials and interviews will also be published in the TOP101 section of Delfi Ärileht and in Eesti Ekspress.